In a previous post we talked about corks and today we will talk about the container the cork fits into, namely the bottle. 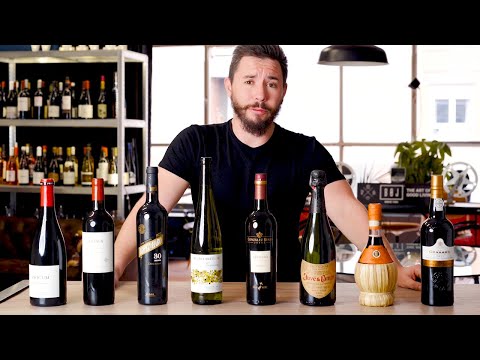 But before talking about the different bottle types and their characteristics, let's look at a little history. We know that corks were first used in the 18th century, so bottles must have been around since before that time. In fact, they started to be used one century earlier, in the 17th century.

Before bottles were used the Romans, followers of the god Bacchus and wine lovers, used clay amphorae but that was only until, in their raids towards the north, they discovered that the barbarians used wood barrels to store beer.

As a result, oak barrels were used for wine for many centuries, until in the seventeenth century, when tired of their inconvenience for large celebrations of the nobility, they began to use a material that Venetians had been using since the thirteenth century: glass.

It was with the appearance of champagne in France in the 18th century that bottles were perfected, as they had to withstand great pressure. To be exact, 6.5 kilogrammes per square centimetre. Or, to give you a more precise idea, three times the internal pressure of a tyre.

Types of bottle according to their shape

Before talking about the different shapes, you may be asking yourself: Does the shape of the bottle influence the quality or preservation of the wine? The answer is no. The shape is merely aesthetic, a way to differentiate the product, that has evolved into different styles depending on the region or type of wine. Only the colour of the bottle and its size influence its preservation. But we will look at that later.

To understand the development of bottles we need to return to history for a moment.

At the beginning bottles were handcrafted by glassblowers which is why they were more rounded. Mass production began in Bristol in 1821, at which time they became uniform.

The most common types are:

Burgundy: Originating in the Burgundy region of France, these bottles are characterised by their long neck and widening toward the base of the bottle. They are mainly used for wines produced in a special way and for medium and high-end wines. In terms of colour, they normally range from transparent for some white and rosé wines, to pale green, although the most common in this case is the dark green colour used for red wines.

Bordeaux: These bottles are very tall, for the conservation of red wines and clarets. They owe their name to the Bordeaux area where they originated.

Tapered: This is a subcategory of the Bordeaux bottle and is wider at the shoulders, creating a shape that brings to mind an inverted cone. They are normally heavier and stronger than Bordeaux bottles.

Rhine: These are originally from Germany. In Spain it is the bottle chosen by most white wines in Galicia and Catalonia. It is also used for rosé and sweet wines. The classic colour is caramel but the most common is green.

Jerezana: The classic bottle for different types of sherry: oloroso, fino and amontillado. This bottle is regularly used for the wine from Jerez and is named after this denomination in southern Spain. It is somewhat heavier than conventional Bordeaux bottles and a little shorter. Its classic colour is dark green or brown.

Champagne: These bottles are named after the French region of Champagne. They are similar to burgundy bottles, but with a more solid neck and adapted to be sealed with a cork stopper and wire cage with its metal cap, which are added after the second fermentation carried out in the bottle for this type of sparkling wine.

Bocksbeutel: These bottles are very different from the previous ones, since they are almost round. They come from Germany.

Chianti: This original bottle comes from the Italian region of Tuscany. With its classic glass container wrapped with woven straw, 35 million bottles are produced per year using the sangiovese grape.

Port: These are the characteristic bottles used for port wine produced in an area of 100 kilometres from the mouth of the Duero to the Spanish border.

The colour of the wine bottle

While the shape of the bottle does not matter for its preservation, the colour does.

Again, we can understand this better by looking at a little history. When glass was produced by hand, it contained many impurities that made it darker. This led to the realisation that the darker the glass, the better the wine was preserved. That is because light affects the evolution of the wine in the bottle.

Therefore, using coloured bottles provides protection against light, better preserving the wine inside. The most common colour is green, but we can also find black, blue and transparent. Darker colours are often used for wines that will spend a long time in the bottle, while transparent bottles are often used for rosé or white wines so that it is easier to see their colour.

The parts of a bottle

The top of the bottle is the ring or finish and just below this is a cylindrical widening that is called the neck.

Does the size of the punt have anything to do with the quality of the wine? Again, the answer is no.

One of the reasons for this dimple at the bottom of a bottle is that when bottles were rounded, glassblowers added it to make the bottles more stable. Tradition has led to this practice continuing.

In the case of sparkling wines there is another reason, as the dimple allows the pressure in the base of the bottle to be distributed over a larger surface area.

Types of bottles depending on their capacity

Does bottle size influence the preservation of the wine? As with the colour, the answer is yes.

If we bear in mind that one of the greatest enemies when preserving wine is oxygen, the larger the bottle, the smaller the ratio of oxygen in the neck compared to the volume of wine inside, so it is better preserved.

So, if you are going to celebrate a dinner with your friends, it is better to choose a magnum than 2 standard bottles ... and I would recommend the double magnum, although it is considerably harder to handle.

Now that we are talking about the standard bottle, why is its capacity 0.75 litres? Well, we again return to history as it always has something to teach us. We have already said that at the beginning bottles were made by glassblowers. Well, between 700 and 800 ml is what they could manage in a single breath.

Another story tells us that this volume of wine, together with the weight of the glass, adds up to about a kilogramme. Finally, in the 19th century the English standardised this measure since their transactions around the world were made in gallons (4.5 l) and a box of 6 bottles was equivalent to an imperial gallon.

The BOJ electric corkscrew is always very useful unless we are talking about bottles of Champagne, sherry and port. With hardly any effort and thanks to it being higher powered than most on the market, the cork will come out really easily.

Another difference is that while most have a plastic body, the BOJ model is made of stainless steel, so it will last longer than a gran reserva.

The vacuum pump and stoppers.

Once we have opened the bottle, there are several BOJ accessories to help us keep the wines and sparkling wines. The most useful is the vacuum pump that allows us to remove oxygen from inside the bottle and keep the wine free from oxidation for longer. However, we also have a wide range of hermetic wine and sparkling wine stoppers that will help preserve their organoleptic properties.

As soon as we open our wine bars, we exclusively use one item to preserve the wine.

We are talking about the hand corker.

Unless there is a cap, we can always re-cork the bottle using the original cork using this hand corker. However, it will really come into its own when we prepare our own creations ... and I will talk about that in another chapter.

A trip to the Rioja Qualified Designation of Origi ...